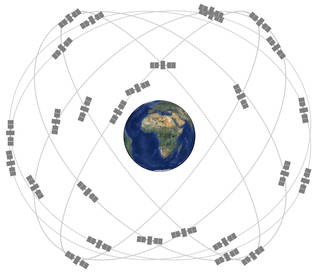 The GPS constellation is comprised of at least 24 U.S. Government Medium Earth Orbit (MEO) satellites that orbit the Earth at an altitude of approximately 20,000 kilometers. Photo credit: Image courtesy of nasa.gov

The GPS system is owned by the U.S. Government and operated by the United States Air Force to meet government defense, civil, enterprise, and scientific needs. GPS currently provides two levels of service: Standard Positioning Service (SPS) and Precise Positioning Service (PPS). The civilian SPS is available to all users on a continuous, worldwide basis, free of any direct user charges. Access to the military PPS is restricted to U.S. Armed Forces, U.S. federal government agencies, and selected allied armed forces and governments.

GPS satellites provide users around the world with a host of services on the ground, in the oceans and up in the air. Here are just a few examples:

Position and Navigation Services – GPS satellites are able to locate or position a GPS device or receiver (e.g., cellular phone, mobile tablet, or turn-by-turn navigation device) by having a minimum of three GPS satellites within range of the device at any given moment. This is done by Trilateration which is a mathematical technique used by GPS to determine the user’s position, speed and elevation. 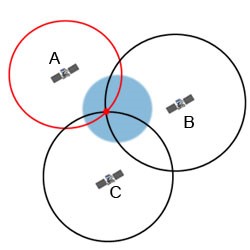 Each of three or more GPS satellites will transmit its location coordinates to the receiver on the device or terminal. Once the distance from the satellites is measured, the GPS device can then calculate the device’s precise location on the Earth’s surface.
This done through trilateration and the more satellites (greater than three) that are used means the more accurate the position data (Photo credit – Image provided by physics.org).

Timing – In addition to 3D locations, GPS provides timing, which is a critical fourth dimension. Each GPS satellite contains multiple atomic clocks that contribute very precise time data to the GPS signals. GPS receivers decode these signals, effectively synchronizing each receiver to the atomic clocks. This enables users to determine the time to within 100 billionths of a second.