Satellite communications services are capable of providing broadband connectivity to rural and remote areas of the country where it remains uneconomical for terrestrial services to deploy and provide both speeds and prices comparable to terrestrial alternatives. These services are available directly to the consumer today, covering all 50 states and delivering broadband offerings up to 100 megabits per second (Mbps) to millions of customers nationwide. Satellite broadband is also used by business and government enterprises, for both fixed and mobile purposes, using a range of spectral bands to deliver assured access to broadband communications. Further, satellites are providing critical backhaul Internet connectivity to local Internet Service Providers and community institutions in remote locations.

Commercial satellite operators, that have already invested billions of dollars in the construction and deployment of geostationary (GEO) high throughput satellites, offer service to consumers today, no matter where they are located. These high throughput satellites, rely on frequency re-use and spot beam technology to produce increased output factors upward of 20 times that of traditional satellites. The industry has seen similar increases in the capacity of its systems. The first broadband satellite began service in 2008 with a capacity of 10 gigabits per second (Gbps); 2019 satellites have capacities of up to 260 Gbps, a number expected to increase to 1 Terabit per second or 1Tbps in 2022.  These terabit capacity geostationary satellites will provide orders of magnitude capacity increases and resulting consumer broadband benefits, remaining competitive with terrestrial offerings.

In addition to these GEO innovations, several companies have already launched or have plans to launch thousands of new high throughput (non-geostationary) satellites in Low-Earth and Medium-Earth orbits to provide high-speed broadband at low latency levels.  Launch, deployment and initial service offerings of the first of these prototype and operational satellites has already begun.

Because satellites have the unique ability to offer virtually ubiquitous coverage for data communications, especially for customers in areas far beyond the reach of terrestrial mobile networks, many service providers use communications satellites to provide high speed broadband services to help bridge the “Digital Divide”.

Following a natural disaster, emergency responders also use satellite broadband services when terrestrial networks have been damaged or destroyed. Unlike its terrestrial counterparts, satellite broadband networks are not susceptible to damage from such disasters because the primary repeaters are on board the spacecraft and not part of the ground infrastructure. Hand-held terminals, portable Very Small Aperture Terminal (VSAT) antennas, and temporary fixed installations can all be introduced into a post-disaster environment to provide support to relief efforts and enhance recovery efforts. For example, satellite broadband provided connectivity in both Puerto Rico and the Virgin Islands, where 95% and 77% of all cell sites were wiped out by Hurricanes Irma and Maria. 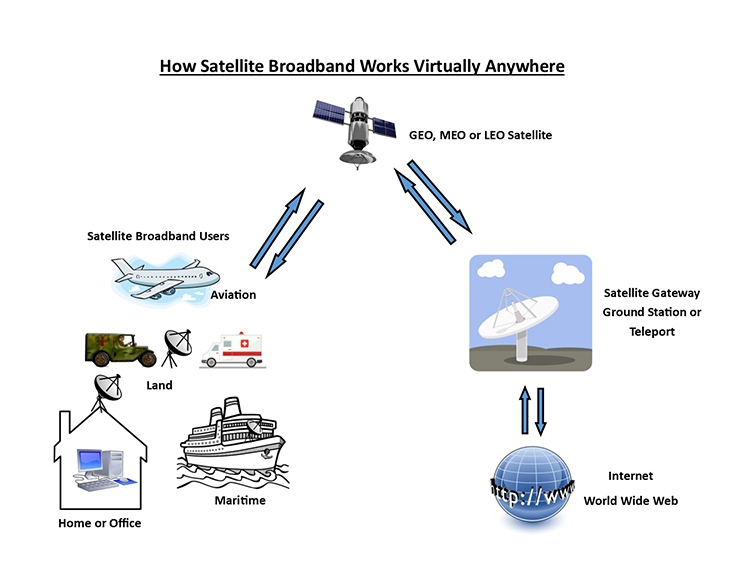 Access to high speed data broadband connectivity is vital for economic development. So as the world prepares to introduce the next wave of mobile data services, there is a vital reality that still must be addressed. There are still more than 3 billion of the world’s population who are not connected to the internet. In the United States, regulators estimate that 21-30 million Americans living in rural communities still do not have access to terrestrial digital connectivity.

Satellites are helping to address this reality. Tremendous satellite industry innovations are happening today with high throughput satellites (HTS), lower cost high production manufacturing of smaller satellites, plus multiple plans for deployment of new powerful high-speed data geostationary (GEO) satellites, medium-earth-orbit (MEO) and low-earth-orbit (LEO) constellations. Thanks to these leaps in innovation, the satellite broadband industry is now seen as an effective and powerful tool that will not only help bridge the gap between those with and those without broadband connectivity but satellite broadband is now seen as an integral part of the rollout of 5G. Therefore future satellite fleets will help bridge the digital divide and will be a part of a system architecture that delivers new 5G, IoT, and intelligent, connected transportation services to consumers.