Remote sensing satellites are used both to map disaster zones and predict severe weather.  In addition to traditional weather satellites, commercial GPS radio occultation satellites utilize the refraction of GPS signal’s in the Earth’s atmosphere to create highly accurate atmospheric profiles and improve weather forecasting.  During disasters, Synthetic Aperture Radar satellites are capable of seeing through clouds and mapping areas of intense flooding before storms dissipate, allowing first responders to focus their efforts on the most heavily impacted areas, while optical imagery is commonly used to map impacted areas in combination with organizations like HumanitarianOpenStreetMap.

The satellite industry is critical in facilitating emergency response efforts and restoring broadband connectivity thanks to its ubiquitous Geostationary Orbit satellite coverage and low-latency non-Geostationary coverage.  Terminals are rapidly deployable, portable, and set up with minimal training, at times the push of a button.  They also provide backhaul for terrestrial infrastructure, and connectivity to low-density regions where terrestrial alternatives are costly.

While satellite communications are quickly deployable from a technical perspective during disasters, it is critical to ensure that there are no major regulatory obstacles to rapid deployment.  Rapid licensing is needed during disasters, so too are rapid customs approval of the devices.  It is critical that points of contact are identified to facilitate communications between satellite operators and local governments prior to disasters.  Advanced planning allows for satellite to provide redundant systems and pre-position systems at critical sites (e.g., hospitals, schools, first responders), and train end-users on equipment use.

Satellites have been critical in disaster recovery post-hurricane.  After Hurricane Maria hit Puerto Rico in 2017, 95% of cell towers were down immediately after the storm, nearly 75% a month following.  Satellites were used to help restore 4G/LTE connectivity to hundreds of thousands of end users, support FEMA’s air bridge, track human and material assets for first responders, and provide service to retail customers such as stores and banks.  Satellite phones at Guajataca Dam, which suffered devastating structural damage, supported the FEMA evacuation of 70,000 people downstream. 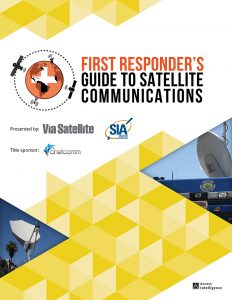 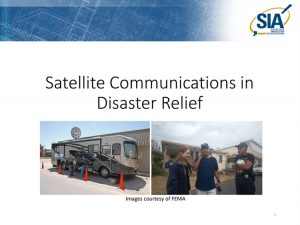