Who is the Satellite Industry Association?

What is a Satellite? 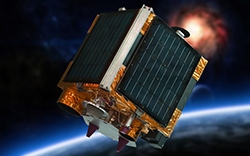 An object that orbits a planet, star or other celestial body is called a satellite. There are two types of satellites – natural and artificial. Natural satellites include objects such as the Earth’s Moon which orbits the Earth, or even asteroids which may orbit larger asteroids. SIA, however, focuses on artificial satellites and specifically those which orbit the Earth.

Artificial satellites are manufactured machines, some the size of a city bus, while cubesats are as small as a loaf of bread and other satellites may be as small as a cracker. There are over 2,000 satellites operating in Earth orbit and they are being used to collect information and transmit it back to Earth for a host of services. Every day, government and enterprise customers plus billions of ordinary consumers across the globe use satellites, most often without even knowing it. From TV broadcasts, to the use of services such as Google Maps and Google Earth, satellites are the backbone of many modern technologies.

For more information regarding satellites and the services they provide click on the Satellites and Services menu tab above.